"Colt M4A1- an assault rifle (carbine), designed in the USA on the basis of AR-15 platform for 5.56x45 NATO cartridge. It was developed primarily for use by vehicle operators and fireteams, who required a more compact and lighter weapon than a standard full-length rifle, but using the same ordnance. However, US SOCOM (United States Special Operations Command) was soon to adopt the M4A1 for all subordinate units, followed by general introduction of M4A1 into service in the US Army and Marine Corps."

The SOPMOD I (Special Operations Peculiar Modification) is in its core a barebones M4A1 with the main differences that it comes with a after market handguard that allows for the installation of up to four accessories.

The SOPMOD II is a refined SOPMOD I that is a fully modified with a magnifying scope, suppressor, laser device and short barrel as a "ready to go" assault rifle that does not require any additional modification.
(only the parts that deviate from the SOPMOD I are listed)

Similar modified to the SOPMOD II variant with the only differences that it has a flashlight, a different pistol grip and a third party charging handle instead of the standard issue charging handle.

It comes highly modified and with a thermal scope which makes it the most expensive off-the-shelf option out of all traders. The futuristic looking pistol grip/butt stock and handguard combination is reflected in the naming of this variant.

The LCOA variant comes with a improved, forward assistless upper receiver that aims for higher accuracy. The full lenght handguard grants the flexibility to install sights and scopes of any size.

2k17 NY Edition
Add a photo to this gallery 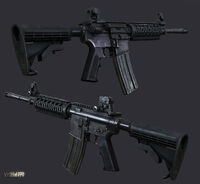 Closeup
Add a photo to this gallery

Retrieved from "https://escape-from-tarkov.fandom.com/wiki/Colt_M4A1_5.56x45_Assault_Rifle?oldid=38126"
Community content is available under CC-BY-SA unless otherwise noted.